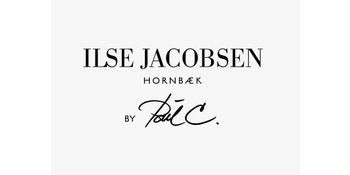 Ilse Jacobsen, entrepreneur, creative director and designer, founder of the company ILSE JACOBSEN HORNBÆK in 1993, stated in a small shop in central Hornbæk.

Since then, the company has grown rapidly both at home and abroad, i.a. through concept stores in Denmark, Norway, Sweden, Iceland and England. Several of the world's leading department stores have included ILSE JACOBSEN HORNBÆK in their range, which is now exported to almost 30 countries with more being added in the near future.

The growth is based on a strong product portfolio characterized by iconic rubber boots, rainwear, dresses, shoes, accessories and an exclusive beauty series. The latest addition to the range is the Vov & Vuf series aimed at "man's best friend", which Ilse has made in collaboration with her daughter Natascha.

The company's DNA and products are based on Ilse's upbringing and life in her beloved Hornbæk, located in northern Zealand, less than an hour's drive from Copenhagen. Hornbæk, with its relaxed atmosphere in scenic surroundings close to forest, water and beach, is popular with the many thousands of tourists who visit the city during the summer months.

Inspired by the natural and raw beauty as well as very special light in Hornbæk which follows the seasons, Ilse Jacobsen has over the years expanded her lifestyle company ILSE JACOBSEN HORNBÆK which includes: